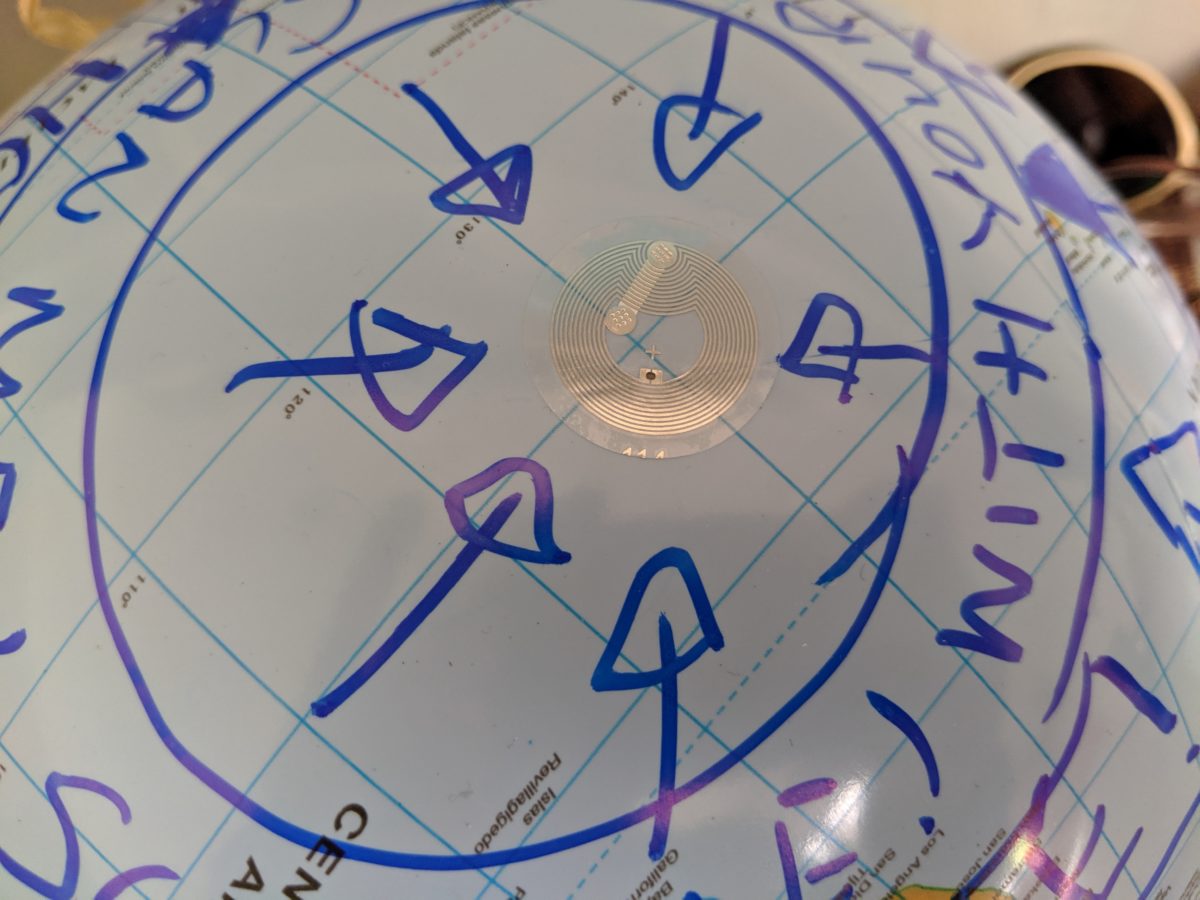 On Friday I was musing about what to do with the globes that I’d ordered for Blue Dot and feeling that there was some level of mischief that I hadn’t quite grasped. Fortunately, inspiration struck in the form of becoming curious about the fact that Blue Dot had moved to an entirely cashless payment system which relied on everyone wearing a band which had an NFC chip embedded in it.

I’m a huge dork when it comes to technology so I knew a bit about NFC and it’s older brother RFID. It was really interesting to see this technology being thrown in at the deep end and pushing people to adopt it. There was a lot of resistence and ultimately I think it wasn’t really explained properly, or early enough to allow people to adjust to the change.

That said, overall the tech worked *ok* although I saw at least four instances where payments couldn’t be made. Despite that though there wasn’t any big meltdown and people mostly adapted with grumbles. Festivals – especially festivals celebrating science and innovation – should be making bold choices like this and I wholeheartedly support the idea, but I hope lessons are learned on the application.

Anyway, it reminded me of NFC (simple explainer here for anyone who wants it) and I started to wonder about this in conjunction with the globes. One of the cool things about NFC is that it’s cheap as chips (lolz) and so I got a big long strip of NFC chips from eBay for about £8. They arrived the next day and so me and Frank discussed possibilities.

What we decided to do was try and Rick Roll random people in the audience. So we got our NFC chip and the ever-excellent app NFC Tools. Then we stuck one of the chips to the ball. We then wrote an instruction for the chip using NFC Tools. This makes it sound like coding is involved, it’s not. Take a look at the app and you’ll see how blinking easy it is. The instruction was – whenever someone reads this chip on their phone, open up YouTube and show them this classic:

We then wrote some instructions on the globes and took them along to the festival. Frank and his friends thwacked them into the crowd and then, contrary to the plan, ran and fetched them. I don’t think they wanted to let them go. So instead they just ran around telling people to hold their phone to the globe and laughing at them when it worked. It was amazing to see them engaging with the technology like they did. Children have such a low barrier to acceptance of new tech that they mostly bypass the “What? Huh?” stage and move onto the fun bit which is asking, “How can we use this to do weird and possibly dangerous stuff?”

It wasn’t perfect, the things I hadn’t anticipated were that so many people have older model phones, which don’t have NFC readers in their spec. What’s the deal people? Upgrade already! The other minor thwarting was that festivals have 20k people in a field all communicating with one mobile mast which is somewhere nearby melting down. Consequently, someone would activate the chip and it would open YouTube and then hang, as it waited for connection. At that point the reveal of the gag was slightly lost. However, as a proof of concept/bit of fun it definitely worked.

Plus it means that I’ve still got a strip of NFC chips to mess around with! I’ve got a few ideas already which range from the odd to the almost certainly illegal and in my experience that’s usually where ideas start to get interesting…